. . pays their personal bills and debts

Philanthropist, businessman and man of the cloth, Prophet Uebert Angel and his wife BeBe Angel shocked several lucky congregants from GoodNews Church in London, by paying outstanding bills and debts during a special service this past Sunday.

During the service this week, Prophet Angel started calling people from the crowd, telling them that their bills, which included rent arrears, electricity bills, phone bills, credit card debts, car debts and  even school fees for their relatives were settled in full. 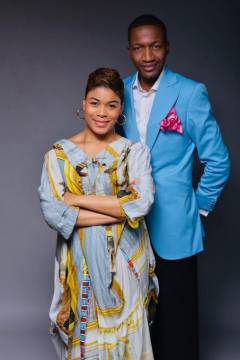 The congregants, who are not actually poor, with some of them qualifying to be called rich could not hold back tears of joy, as Prophet Angel and Prophetess Bebe offered not to just to pray for their bills but physically pay them off from their own pockets as a sign of love and helping their church members.

The man of cloth, seems to be now elusive, selfless and has shifted from the flamboyant image, cementing a strong role in philanthropy since reconnecting with his mentor and life coach Pastor Chris. It should also be noted that this is not the first time he has done this. According to sources it’s actually a common announced gesture that started way back.

The founder of spirit embassy surprised more than 34 congregants from 2011 to 2012, buying them and giving them cars, from servicemen, ushers, protocol team members to strangers who would visited the services for the first time.

The Uebert Angel Foundation has spent millions building houses for the poor, taking care of many widows and paying school fees for children in Africa, India and some parts of Europe.

“I think this should be lauded. I like this new face of Uebert Angel. If he has been doing this then good for him. All I know is I like what he is doing. It’s a new way of doing things and Angel always starts things,” said one comment on Facebook.

In one of his posts on Instagram, Prophet Angel said: “My dedication to humanity now is so profound that I want to leave a legacy that makes a mark on humanity that can’t be erased. To the extend that when I am no longer on this earth what sane entities would say is Uebert Angel loved those in lesser position than he was that he gave.”

You will not die if you love Davido, Burna Boy and Wizkid – Erigga speaks against fan wars

“If you’re insulting your parents because of Ferrari, then they deserve it” says Seun Kuti

”I can’t spend one week without you in this house, I’ll die” – Nengi tells Ozo