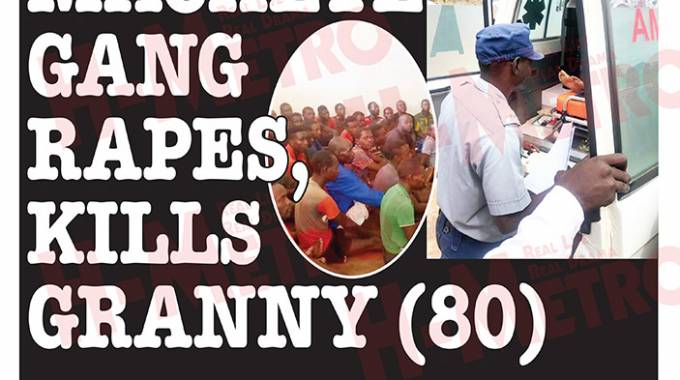 RELENTLESS Machete terror gang (Mashurugwi) unleashed terror in Chegutu as they raped and brutally killed an 80 year old granny and her granddaughter (16) while survivors left battling for life.

Deputy National Police spokesperson, Chief Superintendent Blessmore Chishaka confirmed to H-Metro that a Chegutu family was brutally attacked by a machete terror gang claiming the two lives.
“We can confirm of the sad incident that took place in Chegutu at a farm where the machete wielding gang pounced on a family and killed two people, an 80 year old woman Agnes Antonio and a 16 year old girl (name withheld).

“The deceased were struck in the head and had cuts in their bodies while the other members of the family sustained serious injuries.

“Our team is on the ground carrying out investigations to establish the circumstances and we will make sure the perpetrators will be brought to book.”

Meanwhile the Zimbabwe Republic police has confirmed the arrest of 49 Machete Gang members in Gokwe Nembudziya for robbery and defeating or obstructing the course of justice. Below is the ZRP Press Statement in full:

“The Zimbabwe Republic Police has arrested forty nine (49) machete wielding criminals for robbery and defeating or obstructing the course of justice in Nembudziya, Gokwe during the ongoing clampdown on illegal mining activities.

Circumstances are that on 06 January 2020, 09 machete wielding criminals robbed Zenda Mine, Gokwe of 80kgs of gold ore. The criminals were armed with machetes and they overpowered the security guard who was manning the place. The police reacted swiftly and with the assistance of the public, arrested the suspects who were taken to ZRP Zenda Base, Nembudziya. The getaway car (Toyota Wish) and a machete were recovered. One of suspects Aaron Chipuya escaped and is on the run.

Whilst at the Police Base, two commuter omnibuses carrying forty [40] armed artisanal miners from Kadoma arrived intending to forcefully free the nine criminals from police custody.

The 40 criminals, who were armed with machetes, axes, shovels, picks and knobkerries, charged towards the police vehicle, threatening to attack the police officers and overrun the Police base unless their friends were released. They ignored warning shots by the police prompting the police to shoot and injure two of the suspects identified as the ring leaders.

The rest tried to escape using the commuter omnibuses but the police shot and deflated the tyres leading to their arrest. The police recovered an assortment of weapons including machetes, axes, shovels, pick handles and pick heads at the scene. The injured suspects are admitted at Gweru Provincial Hospital under police custody.

The Zimbabwe Republic Police would like to warn members of the public to desist from engaging in illegal mining activities and other criminal acts. Stern action will be taken against anyone who interferes or hinders the police from performing their lawful duties. Police would like to assure the public that we are firm on the ground to deal with all malcontents.

Meanwhile, police in Chegutu are investigating a case of murder in which two victims, a woman aged 80 and a girl aged 16 were raped and brutally killed while 03 others who include minors were seriously injured by unknown suspects on 7 January 2020, at Ameva Farm, Chegutu. The suspects attacked the homestead during the night using iron bars, knives and wooden logs which were later recovered at the scene. No arrests were made.

We want to take this opportunity to thank members of the public who continue to supply vital information to the police. We cherish the co – operation and support in our quest to the scourge of crime.”