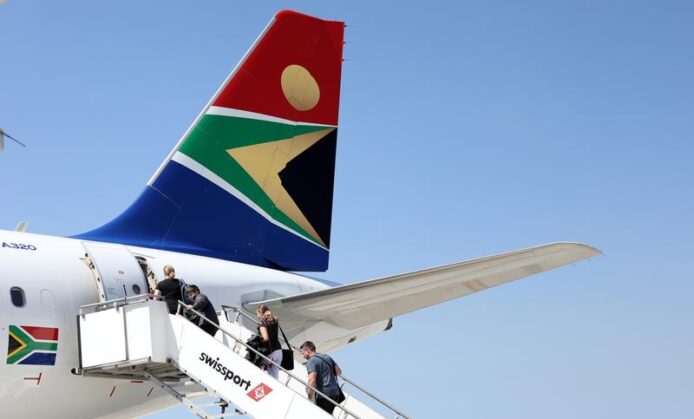 The Government Employees Pension Fund (GEPF) has not been approached to bail out South African Airways (SAA). This is according to GEPF principal executive officer Abel Sithole, who presented the pension fund’s 2018-2019 annual report in Johannesburg on Thursday, December 12.
According to Sithole, the GEPF, Africa’s largest pension fund, has never been asked to fund SAA.
Labour unions have accused SAA’s board and Public Enterprises Minister Pravin Gordhan of excluding them from the critical process.
They say they’re worried about the board retaining control over the state-owned entity.

Trade union, Solidarity requested a high court order on November 21, to place the airline under business rescue.
Another two unions – the National Union of Metalworkers of South Africa (Numsa) and the South African Cabin Crew Association (Sacca) – threw their weight behind Solidarity’s court application.
A court order would have given the unions more influence over the process.
However, voluntary business rescue allows SAA’s board to retain control over the appointment of a business rescue practitioner.

More than 5,000 jobs are at stake at SAA alone.
Another 5,000 jobs are at risk at SAA’s subsidiaries, including Air Chefs, Mango, SAA Technical, and South African Travel Centre.
Gordhan says he fully supports the board’s decision to place SAA under business rescue.

To trade or not to trade

SAA has failed to file its annual financial statements for two consecutive years. The airline has also missed two successive deadlines to table its annual reports in Parliament.
By failing to file the national carrier’s financials, the airline’s board of directors are in breach of legal provisions contained in the Companies Act.
It remains unclear whether the airline has operated as a going concern. If not, the company has been trading recklessly, which places the directors in the regulator’s crosshairs.
This could be the reason behind SAA’s brisk handling of the problem.
It quickly submitted a business rescue application to the regulator – the Companies and Intellectual Property Commission (CIPC) – and appointed Les Matuson as the practitioner.
Gordhan has promised to urgently meet with the business rescue practitioner, labour unions, and other stakeholders.

Partial privatisation of the national carrier may be on the cards.
Government could also bring in a private equity partner to rescue the ailing firm.
The bottom line: Over several years, SAA has accumulated billions of rands in debt in the form of government guarantees. This time it seems like the clock has run out for the airline which is facing major restructuring.