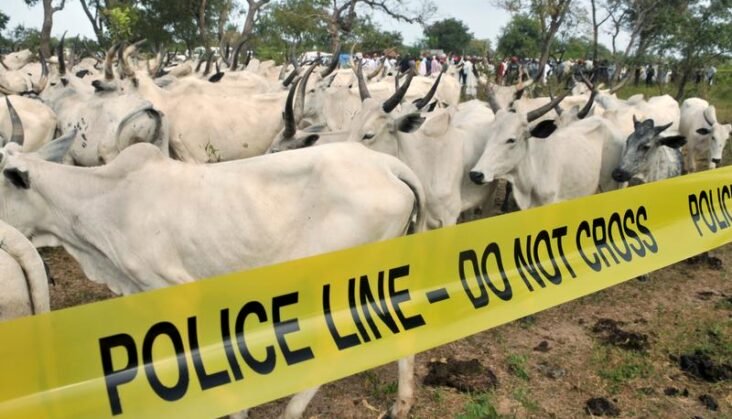 Rescued cattle recovered from cattle rustlers gather at Dajin Gomo village of Sumaila local government area Kano, Nigeria, November 2, 2015. REUTERS/Stringer
Nigeria is breathing new life into its Rural Grazing Area (RUGA) project by relaunching it with a new name. The government has rebranded RUGA as the National Livestock Transformation Plan (NLTP), which hopes to ease tensions between herders and farmers.
Nigeria’s NLTP is attempting to remodel grazing reserves into ranches across seven states that signed up to the pilot phase.
According to the International Crisis Group, conflict between herders and farmers was “six times deadlier” than Islamic State-related attacks in 2018. According to Amnesty International, an estimated 2,000 people died in 2018.
The violent clashes are mostly over access to land and resources, and poses a threat to the country’s stability.

Several state governments in the South and Middle Belt openly criticised the RUGA project. They called for it to be scrapped, saying it was a ‘land grab’.
The ₦179bn ($500m) NLTP is a 10-year initiative (2018-2027). It works with willing states to implement programmes for the rehabilitation of internally displaced people, and develop ranches. It appears to have more support than its predecessor.
The NLTP – presented by the National Economic Council (NEC) in June 2018 – asked cattle herders to register with cooperatives for the ranching scheme. The ‘coops’ would benefit from access to land rental agreements, grants, loans, and other subsidies from state governments.
Several states, including Adamawa, Taraba, Plateau, Nasarawa, Benue, Kaduna, and Zamfara have been selected for the project, according to the NEC’s Director of Social Mobilisation and Women Development, Mohammed El-Nafaty.
He says government has gazetted 141 out of the 416 grazing reserves, spread across the six geo-political zones of the country with a total of 3.4m hectares of land.

There’s a great deal at stake with the launch of the NLTP.
Experts believe climate change is leading to more clashes over limited resources between Nigeria’s farmers and herders, especially in the Sahel.
Recently, Nigeria shut down its land borders, suspending all imports and exports. It hoped the move would curb smuggling and promote food security.
Bottom line: As herders and farmers compete over increasingly scarce resources due to the impact of climate change, Nigeria is making a second attempt to launch a project to prevent further loss of life.