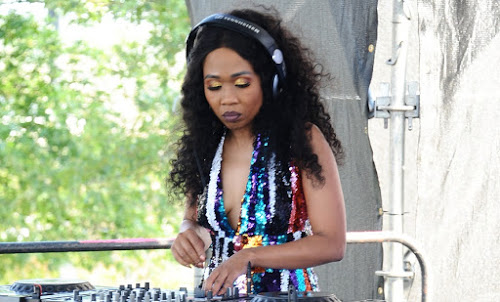 DJ Zinhle one of South Africa’s top female DJs,  was very happy with Dineo Ranaka’s featuring of her song during a performance. Dineo, who is having a blast also being a DJ, played Umlilo and was clearly having the time of her life while doing so. Zinhle saw a video of the performance and complimented Dineo on Twitter.

“This video of @dineoranaka is a perfect description of how #umlilo makes me and a lot of people feel. This video gave me joy. Thank you Dineo.” READ ALSO: Neyi Zimu’s widow opens up about life after losing her husband Dineo responded to the reaction by Zinhle and took the chance to also gush.

Sis, like I said to you in Cape Town, thank you for umthandazo of the year!! God knows most if not all of us needed that prayer 🙏🏽♥️🙏🏽 it awakens umphefmula ongadalelwanga ukufa 🙏🏽♥️ https://t.co/xOuXZSlwUY

This video of @dineoranaka is a perfect description of how #umlilo makes me and a lot of people feel. This video gave me joy. Thank you Dineo. ❤️😍😭 pic.twitter.com/uC5F938HTH

Umlilo is by far one of the most popular songs in Mzansi right now – it even won song of the year recently. Viralafrika.com reported that Zinhle thanked her fans for supporting her and the track and taking them to the top. Dineo, who received a mixed reaction from music lovers when she started DJing, knew that she would please the crowd if she gave them Zinhle’s hit

“If you’re insulting your parents because of Ferrari, then they deserve it” says Seun Kuti

”I can’t spend one week without you in this house, I’ll die” – Nengi tells Ozo

MAN crashes G-Wagon he rented to impress a girl (Video)