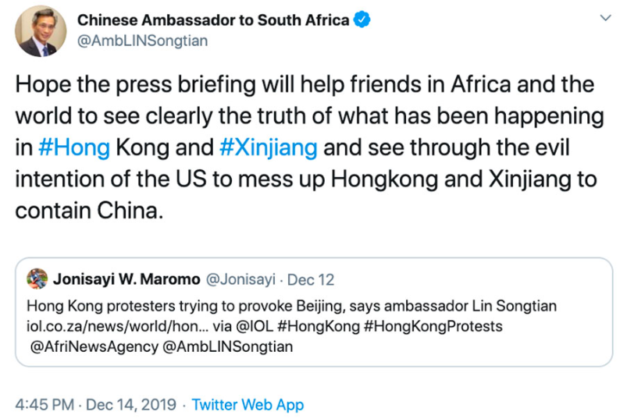 After many years of silence, Chinese envoys are now finding their voice… on Twitter.
The Chinese government’s rapid adoption of Twitter over the past several months now appears to be entering a new phase as envoys across the continent are using the social media platform to launch much more pointed attacks against the United States and other critics.
Over the weekend, for example, Ambassador Lin Songtian in South Africa posted a Tweet where he accused Washington of having “evil intention(s)” for what he claims is the U.S. desire to foment unrest in Hong Kong and Xinjiang.
Neither the U.S. embassy nor the State Department appear to have responded to Ambassador Lin’s accusation.
Ambassador Lin’s focus on the ongoing unrest in China’s peripheral territories highlights a broader trend among Chinese diplomatic Tweets on the continent where there appears to be a concerted effort to challenge prevailing international news narratives about the turmoil in those regions and instead convey the Chinese government’s portrayal of events there.
Aside from Ambassador Lin, who is by far one of the most outspoken and active Chinese diplomats on Twitter, the embassies in Chad, Uganda and Kenya are the most active in posting Hong Kong and Xinjiang-related content.

Three reasons why Chinese diplomatic tweeting in Africa is important

THE BOTTOM LINE: There’s a certain irony that the United States, whose own leader is arguably the most proficient politician on Twitter anywhere in the world, is seemingly caught flat-footed by the new Chinese assertiveness on the platform in places like Africa.
Envoys like U.S. ambassador-designate Lana Marks or the embassy in Pretoria will either have to start to mix it up with Ambassador Lin online or else just cede him this increasingly important public space.
SUGGESTED READING:
[THE CITIZEN] China’s SA ambassador says ‘evil’ Trump and the West are behind Hong Kong riots by Eric Naki
[SOUTH CHINA MORNING POST] China’s African envoys take Twitter tips from Trump in PR offensive by Jevans Nyabiage
To follow ALL of the Chinese diplomats and embassies in Africa who are currently active on Twitter, we’ve created a helpful Twitter list that makes it easy for you to follow.
This article first appeared on The China Africa Project